You guys. The last time I did a Throwback Thursday post was October. That’s crazy. And fairly unacceptable. Considering the fact I have a closet full of journals, I have virtually no reason to not write those posts. I owe you. Expect payment in future TBT posts. If I had at all planned this out, I would have written this post, adjusted the previously shared diary entries to arrange for this to be posted in September, when it was actually appropriate. I have a hard time holding myself to self-imposed deadlines.  Anyway, onto the meat of the stuff:

Wow. America was attacked today. This is horrible! I can’t beleive this happened!

Ok, today during ILA, Mrs. Sandlin freaked me out. she started out by saying how much of a horrible day today is. She went on to tell us about how terrorists attacked us. They highjacked 4 airplanes and crashed them into both world trade buildings and the pentagon.

It’s scary! I don’t know if anybody knows who did it, but Mr. Wittman in History said that there WILL be retaliation. AKA: go to war.

And as of right now there are NO planes in the air. NONE. Planes coming into America are being diverted to Canada.

This is horrible! I was coming home from Jade’s house & we saw DOZENS of cars in line to get gas. I was wondering why & I asked my mom when I got home & she said it’s going to be $3.50 a GALLON. And my parents thought $1.75 was a lot!

This is horrible! I can’t use words to discribe how terrified I am! My life is going to change so much! I mean even just gas prices! My parents will be paying twice as much as they used to!

What if we go to war? I don’t think anybody in my family will go to fight for America, & I pray to god that doesn’t happen. i don’t know what I’d do without my dad being home!

I’m sorry I keep writing the same things down, but I’m so worried. The gas thing totally freaked me out. If we go to war, there might be rations of canned foods, gas, make-up, toys, everything! I just can’t believe this is happening!

I need to burn some energy.  Luv always!

P.S. I’m in so much of a daze I forgot 2 tell you that the football game was cancelled & Cory hugged me after school. What a sweetie! LOL, there’s my shallow life again.

I have a tendency to trivialize tragedies as a way to cope, so my gut here is telling me just to make fun of the fact that I said 10,000 people died that day or that I misspelled “believe” and “describe” though I used to pride myself on being one of the best spellers in my class. But to do that would be to further trivialize my experience. It’s unnecessary. Nobody gains anything from me making fun of Young Ashley for coping the only way she knew how: to write dramatically as if she were writing a new Dear America book.

Joking aside (sarcasm is so deeply embedded in my sense of self. I should go to a therapist), I remember this being a very weird day. Before Mrs. Sandlin told my ILA (English) class what had happened, I heard chatter about it during passing time. Grabbing my books and slamming my locker door, I rolled my eyes, thinking it was some “big” tragedy that the news networks were going to eat up. At that point, I had never heard of the World Trade Centers or terrorists. I assumed terrorists was a new gimmicky word aimed at scaring the public. I was underwhelmed by this supposed tragedy, even when Mrs. Sandlin turned on the TV.

I’m a little ashamed to admit it, but I was excited while watching the news. Maybe this was really it – the event that would inspire historical fiction I could speak on! I had lived through this. I could someday talk about this. It was too abstract of a thing to inspire fear in me. I was thrilled by flares of anxiety later during the day, as I imagined a different life where my dad worked in one of the towers. Of course he came home at the end of the day, but I was just thrilled about the idea of wearing that badge of tragedy. It wasn’t real to me. That’s why I ate it up. I think on some level, I was aware that this was happening to real people and that other children were going through the terror of not knowing if their parents were alive, but it didn’t really mean anything to me. I felt empathy’s tug, but was saddened when it remained abstract. 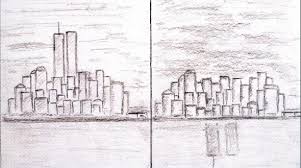 Part of what has always disgusted me about national tragedies is the way in which people devour the story as if it’s their own. When young and in the thick of these events, of course I was scared and terrified, but it made me feel uneasy to talk about it, so I just didn’t. Maybe I had a deeply embedded journalistic integrity, but probably I was afraid of being found a fraud. I’m sure there’s some level of that anxiety that still keeps me away from news networks, but the news culture seems so cannibalistic. I realize I keep going back to this eating theme, but it works: viewers chew on this news for a day or two, enjoying the bursts of appropriate emotional flavor (horror, fear, sadness, excitement, etc) before digesting and leaving it behind when they’ve had their fill. The victims are eternally masticating an overdone steak while the spectators move further down the buffet line.

So what does this leave me with? Willful ignorance disguised as respect to victims? That’s probably pretty accurate, though a bit cynical even for me. Tragedies are personal. Media is not. Victims will always feel violated, and I’d just rather not be a part of that violation.