About a year ago, two of my friends and I started a monthly get-together for a nice dinner. I think the idea was to pass it around and change the location each time, but it always ended up being at my place. I was happy about this – I didn’t really want to share the burden. Around then, I started realizing that I enjoyed cooking almost as much as I enjoyed baking. There’s something incredibly depressing about preparing a really wonderful meal and having no one to share it with.

Over the summer, I was able to share some really nice food with them: maple-glazed pork chops with gnocchi and parmesan cheese; East Indian curry (served on jasmine rice, topped with choices of fruit, peppers, and nuts); Dutch babies for a Christmas-style brunch in the middle of October; slowcooker turkey and cranberry dressing, pizza with carmelized onions, halved grapes & balsamic glaze….all usually paired with wine or beer brought by Nicole or Andrea, and then ending with dessert (french silk pie eaten directly from the pan, frozen yogurt with canteloupe…) we ate while sprawled on the couch, complaining that we felt enormous. Somewhere along the line, they gave me the nickname B-Crocks – an ironic abbreviation of Betty Crocker that made me feel simultaneously adorable and badass. I solidified the badassery by temporarily tagging my kitchen wall.

I thought about leaving it, but I couldn’t find a decent place for the fridge AND display my tag.

When I had my housewarming party a few weeks ago, Andrea and Nicole presented me with a gift of a hula hoop (which I used once and has been leaning against a wall after it fell around my ankles) and a handmade installment of miniature frames that spell out B-Crox. It looks pretty awesome in my kitchen.

Nicole was actually the one who gave me the idea for a weekly B-Crox post, and in a picturesque turn of events, Andrea joined me for my first meal of Brunch with B-Crox: White Cheese & Chicken Lasagna.

This is a recipe I found on Pinterest (where else do people get recipes?) and modified for a smaller sized pan (I think a giant pan of lasagna is about as depressing as just eating cookie dough for dinner). If you’re cooking for a large group, a family, have room in the freezer, or want to see fancy pictures and well-written directions, you can use the original recipe. The only real difference between this recipe and the one below is that I used fresh mozzarella that was marinated in olive oil and italian seasoning instead of plain shredded mozzarella – mainly because it was on sale and I really wanted fresh mozzarella. 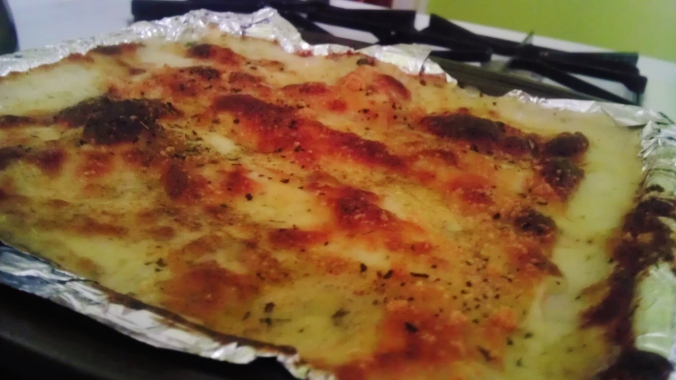 Are you ready for this cheesy goodness that is the opposite of heart healthy? 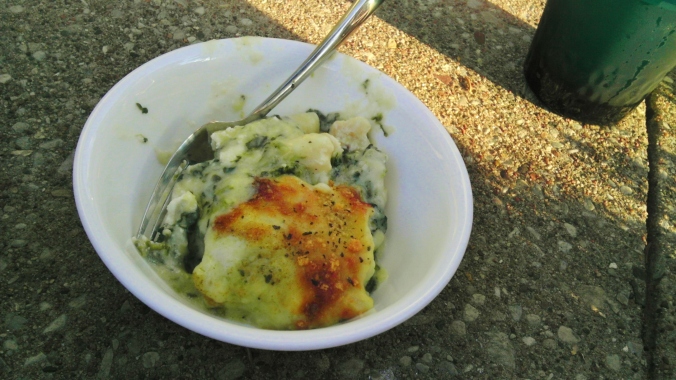 Unlike most lasagnas, I don’t recommend storing leftovers on the sidewalk. This keeps best if in tupperware in the fridge.

Enjoy your food! There are starving kids in Ethiopia that won’t benefit from your gluttony.