Over the last few months, I’ve been thinking of trying to find some way to make posts a little bit more regular. My style here has always just been “Hey! That’s clever idea! I bet I can write a few paragraphs about it. Let’s spend three hours writing a 1,000 word blog post!” I enjoy that because I’m not held accountable if a week goes by without posting anything because I’m not inspired. Nobody can tell me they were expecting anything from me. All they can do now is be delighted when they get a notification that I’ve written a new post.

I’ve had conversations with a few bloggers about this. Some say it’s best to stay to make a schedule to keep yourself in check. Readers appreciate consistency. Other bloggers say that it’s best to write only when it strikes. I just use this as an excuse not to write. If I get an idea, I think, “Yeah, I could do that…but, but…Pinterest!” I tell myself I’m not writing because my readers will know that I didn’t want to write it. But you know what? There’s some truth there. I think you guys would stop reading if I started writing solely about Zooey Deschanel bangs (just make sure the edges are rounded) and outfits to wear when you see your ex-boyfriend (in the summer: a white sundress. With spanx, you ho. In the winter: skinny jeans, heeled boots, and something comfortable. Wear a scarf. Don’t be a ho.) Just because I’ve written about those things (and those are the two highest search terms that lead new visitors here) before, it’s not what I write about.

At the most basic, I share my life. Some of my posts leave me feeling extremely vulnerable after they’re published. Others make me laugh and I’m excited to see how people react. What I seek most is to be honest with you. I want you to feel like we could be friends. Because we could be. And probably should be, so friend me on Facebook. Who doesn’t want more friends? Like everyone else, my life can be exciting, tedious, hilarious, heartbreaking, and melancholy. I just try to share those experiences with you.

So, I’m starting something new here on Everything is Blooming: Throwback Thursdays. I’ve been journaling since I was ten years old. I’d like to show you my beginnings. I’m doing this for a few reasons. First: it gives me an excuse to go through this box that I’ve been lugging from apartment to apartment. Second: I think it will be hilarious. When you’re going through childhood, adolescent, and teenage angst, you are certain that whatever you’re involved in has enough cosmic weight to deserve the universe’s undivided attention. Fifteen years later and this stuff is gold. Third: I think my memory is fading. I can’t remember details from high school more than I can remember those from fifth grade. Fourth: It will give me more writing material. Serious writing material. 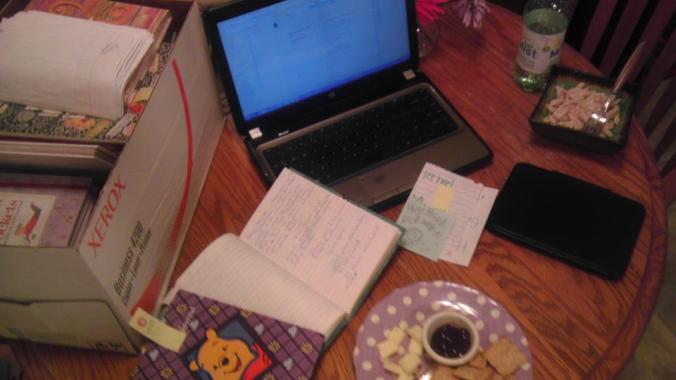 I’ve spent the last decade trying to develop my writing voice. Blogging sort of interrupted that. Suddenly I was writing for an audience. It’s a bit of a performance, so some things don’t get to be in the show. I don’t allow you to know everything I laugh about (If you’re interested, my twitter gives you a pretty good idea). I don’t let you know about every friend, every date, every hangover (I didn’t mean anything by putting those two together. I promise), every creation, or every anything for that matter. Some parts of my life deserve to be kept sacred and others deserve to preserved in something that takes me more than three hours to write. These are the things I’m hoping to uncover while I searching through my journals.

If you haven’t figured it out already, I’m going to share a journal entry or two – sans editing, so you can hopefully see my grammar and apostrophe use improve – with a short commentary. This will be posted every Thursday morning, today’s inception being the only exception.

So, without further ado – Throwback Thursday:

I think instead of calling you “Diary’ I’m going to of a name for you.

There’s only 1 thing I hate about my mom. When your in the middle of one thing she told you to, she tells you to…There she goes again.

I haven’t thought of a name for you yet. Wait! Genna. I’m going to name  you Genna cause she just moved all the way to south Caralina. And I won’t see her that often. I have to go to bed now. Bye, Genna.

Now schools seems even longer! I have to sit by Andy B and Josh D! I hate both of them. Like this afternoon they kept on singing “Saxamaphone.” Then I’m like, “Will you shut the heck up?!!” They stoped for about 2.5 sec., and started up again. The only good part is that Ashley M is in my group.

It’s also worth nothing that I signed every entry. Like it was a letter or something. The signature usually varied, but I hope that when I write a book someday, I’m able to sign all of the first editions with this beauty:

I probably should have taught a calligraphy class for ten year olds. I could be rich right now.

The year before, I had borrowed The Diary of Anne Frank from the school’s library. I remember feeling superior as I walked to the left side of the library towards the chapter books while the other kids stayed to the right, which held most of the  picture books. At some point – I’m not sure when exactly – I began scoffing at books with illustrations. This remained until I took two semesters of comparative literature and read Persepolis and Watchmen.

When I checked out, I remember the librarian asking me if I was sure I wanted to read The Diary of Anne Frank. “Do you know what this is about?” I told her yes, though I had no idea. I just had no idea diaries could be published (Blogs would have BLOWN Young Ashley’s mind), so when I saw the word “diary,” I grabbed it. After checking out, I began reading immediately and decided I was going to publish a diary. And since Anne had a name for her diary, I needed one for mine. I thought that people would be interested in knowing that it was the name of my cousin. Wasn’t I clever?

Ever since reading Anne’s diary, I’ve deluded myself in thinking that other people would be interested in my thoughts. I like to think  that it’s an evolved flavor of egotism. I try not to just blurt out days’ agendas, though sometimes that’s all I feel I’m capable of: “I woke up and had like FOUR cups of coffee, you guys. And then, omg, the cute guy at work wore those pants and he like totally smiled at me and then I only worked a half day because I had an appointment in the afternoon. It was so weird and like, seriously – have you heard the Nicki Minaj album? It’s literally the worst thing I’ve ever heard.” (I was serious about that last part though. Have you heard it?It’s terrible.) I try to go a little further and touch on the emotions and illustrate the connections.

If I haven’t learned at least a little about myself at the end of it, I’m not really proud of the post. And to answer your question, there are only a few posts I’m truly proud of. I’m going to be brainstorming other regular post topics, and if you  have any suggestions, I’d love to hear them. Until then, I’ll keep flipping through my pages and laughing at myself, per usual.