I’m not sure if anyone will believe me, but I didn’t meet a millionaire at the singles’ night. In fact, it was pretty underwhelming. I met two people: the first was April, a 34-year old from North Carolina who is going to be an economics professor at UW-Oshkosh. The second was John, a 40-something bachelor who asked us what we thought about divorced men with children, “hypothetically speaking”. I suspect he has children. John asked us our ages. He must not be aware that you’re not supposed to ask women that question. Probably why he’s still a bachelor. Also, he had coffee stains on his over-washed white (grey) polo.

I spent an hour and a half nursing a glass of malbec and talking with April about  books, feminism, women’s literature, and relocation. I probably should have gotten her number.

The bar was pretty quiet, a few groups of women (no apple-shapes, though), and a handful of men who looked like perpetual bachelor, so I don’t feel I struck out.  I’m not sure what else I was expecting at this thing, anyway. The outcome didn’t exactly surprise me. The only guy I was remotely interested in was the bartender, who kept smiling and holding eye contact from far down the bar. I ended up leaving my number on my receipt.

Yeah. That happened. I’m a classy woman who leaves her number on receipts for single glasses of wine.

Ooooof. That’s all I can really say about tonight. Whatever. I have a big soft bed and a growing stack of books on my bedside table. I’ll get at that instead. 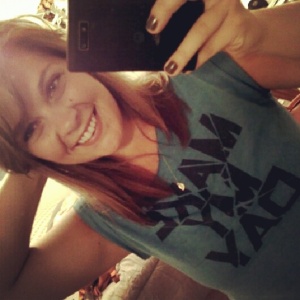 i bet if i had worn this shirt, i would have gotten all the perpetual bachelors’ numbers. the skirt was a grave mistake, obviously.

3 thoughts on “So that happened…”

Error: Twitter did not respond. Please wait a few minutes and refresh this page.