If you have to ask someone to change, to tell you they love you, to bring wine to dinner, to call you when they land, you can’t afford to be with them. It’s not worth the price, even though, just like the Tiffany catalog, no one tells you what that price is. You set it yourself, and if you’re lucky it’s reasonable. You have a sense of when you’re about to go bankrupt. Your own sense of self-worth takes the wheel and says, “Enough of this shit. Stop making excuses. No one’s that busy at work. No one’s allergic to whipped cream. There are too cellphones in Sweden.” But most people don’t get that lucky. They get human. They get crushes. This means you irrationally mortgage what little logic you own to pay for this one thing. This relationship is an impulse buy, and you’ll figure out if it’s worth it later.

So, assuming you’ve gone ahead and purposefully ignored the first adage because it doesn’t apply to you and you are in love the way no one in the history of spooning has ever been in love: now what? You’ve gotten what you want, but the state of mutual ownership has shifted. Like that piece of jewelry that you’re never quite comfortable wearing, you become concerned with its whereabouts, who borrows it and for how long. You wonder if you’ll lose it, if it might look better wrapped around someone else’s neck. Admit it: wouldn’t it be less stressful not having it touch your body at all?

The first time I read  Sloane Crosley’s essay “Off the Back of a Truck” I was at the university gym almost two years ago. I was on the elliptical and I had to stop several times to make notes in my Kindle. The way she talked about relationships in such a frank way was refreshing. At the time I was with Bill and didn’t think I would ever need to seek salve for the pains of a breakup. But it resonated so fully that I wanted to stop other girls on the treadmills and bikes nearby and read paragraphs to them.

When Bill and I broke up, this book was the first book I bought, only hours after the initial exchange. I couldn’t remember the passages. I couldn’t remember the name of the title. I just knew that I wanted the paper copy of the book. I needed the tangible thing to hang on to and to underline those paragraphs that had literally given me pause. I also wanted to be able to point to something and say, “This got me through it! This got me through that first day and helped me make sense of everything in one fell swoop.” 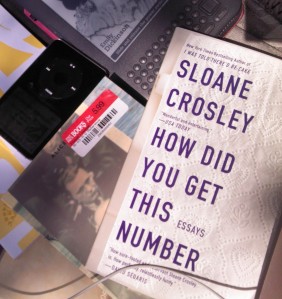 Of course, the book didn’t really get me through it. What it did was remind me a couple things. First, that I needed to figure out how much this was costing me. Was it going to hurt me more than give me satisfaction? Did I have to sacrifice my self-respect, goals, hopes, interests, or even passing amusement in order to make this relationship work? What, exactly, was the cost? It was a rhetorical question, one I’m not sure I’ll ever be able to answer in a quantifiable sense, but I knew that for then, at least, I couldn’t afford it. The second was that I would eventually be okay. Eventually. Eventually I would be able to walk past his old house and think, “That’s where Bill used to live” the same way I might make note of a post office or grocery store. Eventually I would just look back on it as a part of my life.

That was what most struck me that afternoon on the elliptical – I knew what she meant. I had passed landmarks with ex-boyfriends and just seen them as cold facts. That was where we went on our first date. That was where he first saw me cry. We rented movies from that Blockbuster. We walked together along that trail. I recognized how those same facts that had once torn me apart now read like an uninteresting pamphlet.

I had the first promise of that the other day. I was getting ready for a wedding on Saturday night, and I digging through my desk drawer when I came across a picture from our sixth month anniversary. It was of us kissing – one of those barf-worthy things that I hate seeing on Facebook. But it was a picture I had once had framed and sat on the table next to my bed. Instead of crying and wiping my tears on my dress, I set the picture aside. “Oh,” I thought. “There’s that picture. I was wondering where it had gone.” And then I continued getting ready.

Later at the wedding, I was by the bar by myself for a few moments and I thought about how remarkable of a step that was for me. It was the first time I had come across something of us – something significantly tied to fond memories with him – that didn’t physically hurt me. It gave me hope that I was moving forward and that things would be okay. So when my friend returned from the bathroom and asked if I wanted to dance, it only seemed natural for me to accept his invitation and to enjoy myself, even if I was dancing to disco.

There is one thing you know for sure, one fact that never fails to comfort you: the worst day of your life wasn’t in there, in that mess. And it will do you good to remember the best day of your life wasn’t in there, either. But another person brought you closer to those borders than you had been, and maybe that’s not such a bad thing. Knowing what you can afford is useful information, even if you don’t want it.

You can find the above selections and more gems in Sloane Crosley’s book How Did you Get this Number. It would be a great book to read on the beach.

2 thoughts on “And then I reread Sloane Crosley…”