I disabled my OkCupid Profile again a few weeks ago. I’ve been on that site three times in the last year or so, and I was only really embarrassed about it the first time. I don’t know why people are embarrassed about it – a good chunk of our lives are spent online in one way or another, so why not widen the range of creeping? It’s like people watching at the mall, but you’re lonely and are probably still in your pajamas.

The first time, was what I’ll call the Omigod I Just Want a Boyfriend Phase. After having my heart broken only a few months earlier, I was determined to prove to myself that I could get a boyfriend. I had this idea that it would be pathetic if I didn’t have someone buying me a Christmas gift. So, I set up a profile. Being smart, I exchanged messages with a guy for a few weeks to determine he wasn’t a serial killer or jerk. After two weeks of essay-length messages, we agreed to meet for indian food on a Sunday evening. Because we had such great messages (I think we just both liked talking about ourselves), I expected we would fall in love immediately and realize we never wanted to be apart. Four minutes into the date I was annoyed because he was afraid to try the vegetable samosa and gave me a full disclaimer about how he didn’t like spicy food.

Upon returning home, I decided two things very quickly: 1. That dude was not going to be my boyfriend, and 2. So as not to fall in love with an idea I created, no more than a few days of exchanging messages before meeting. 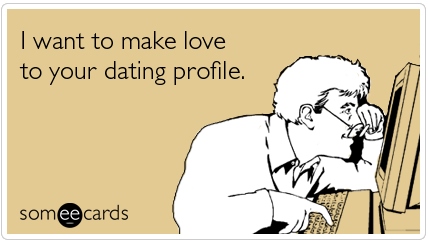 After a few more underwhelming dates (a barista who wanted me to be obsessed with anime just like him, a brand manager who made six figures and was supremely out of my league, a gorgeous and understandably depressed former decathalete), I disabled my profile and decided to read Infinite Jest.

The second was my I’m Just Dating Phase. After getting about 200 pages into Infinite Jest and giving up, I reactivated and edited my profile sometime in January. I was beginning to run, had lots of energy, and I wanted someone to validate my suspicions that I was now confident and sexy. I decided to approach dating in a way I had never done before: going on too many first dates in a short period, and exercising my wit, charm, and debate skills. I didn’t have expectations of romance or long-term relationships on these dates, I really was just enjoying fun conversations about fishing trips with this guy, volleying sarcastic jabs with that one, and dissecting pop culture with the last one.

The idea of monogamy never came up with any of these men, and I figured that until I fell for someone, or one of them brought it up, I would keep enjoying the company of each of the men. Eventually, it got tiring, so I narrowed it down to one. Once I realized that I was looking for more than rhetorical deconstructions of Louis CK jokes to sustain a multidimensional relationship, I ended things with him. Then I realized how much I had missed sitting in sweats on Saturday nights watching Hulu and Pinteresting.

This final time was my What the Hell, Let’s Try this Again, I Am Not Opposed to Being in a Serious Relationship Phase. I reactivated my profile on a lazy Sunday morning because I realized I wanted to share my life with someone. I wanted that crazy feeling of falling in love. I wanted to be impatient to see him. I wanted to get excited when I saw him calling. I wanted to feel adored and I wanted to adore someone. I really went into it hoping to find an equal – someone who is confident and open enough to excite me intellectually, physically, and emotionally.

This is the first time I feel I can say I have a fulfilling life. I have a challenging but rewarding job, a place that truly feels like my home, friends who are there for me regardless of the circumstances, a (relatively) healthy lifestyle, a supportive family, and I’ve finally gained the independence that allows me to be content as myself, instead of just in relation to another person. I love where I am in life right now, and I hoped to meet someone to share that with.

I met a few guys, but it wasn’t as fun or carefree as the I’m Just Dating Phase, obviously because I had the expectation of a relationship. This kind of made me realize why online dating will probably never work for me. I think an essential part of me falling for someone is the uncertainty that comes from meeting in real life. I enjoy the initial wondering if my feelings are reciprocated. Spiteful Nice Boys might say that I just want a withholding asshole, but they’re just being spiteful nice boys.

I just don’t like how prescribed online dating seems to be. Presumably, you’re both on the site to meet someone you’ll fall for. There’s no mystery. I suppose if I were desperate and particularly ruthless, I could go through a bunch of first dates, end them all with, “This probably won’t work between the two of us because you bore me” until I meet someone I’m crazy about, but I don’t have the patience to do that. It’s not that the men I’ve met on the site aren’t perfectly wonderful people, because they are – it’s that none of them has been my perfectly wonderful man. I know – how terribly cliche.

I think I’ll just continue what I’m doing: waiting for some hunky boy to stumble into my writer’s nook on a Saturday night, then we’ll go to bed and he’ll play with my hair while I read Lolita for the eighth time.