I’m thinking of doing this thing where I try one new thing a day. Just one thing I’ve never done before. I’m not talking about doing crazy things like bungee jump on Tuesday and steal a pair of shoes on Wednesday, I mean relatively little things to push myself out of my comfort zone. 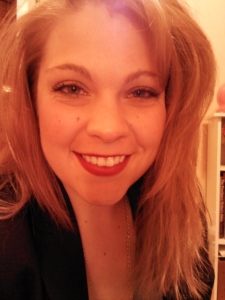 I did two last night. I went to a vinyl release party at a bar by myself and I wore lipstick. As I’ve said before, I don’t know how to wear lipstick, so this was an exercise in makeup tricks and confidence. I was hoping one of my girlfriends would come along, but that didn’t end up happening. So I was faced with a decision: stay home and watch Grey’s Anatomy on Netflix while painting my nails for the second time this weekend and go to bed before eleven, or go to the Nicole Rae  and the Traveling Suitcase vinyl release party where I would most likely see people I knew. Also, at this party I would be beautiful and charming and meet fabulous new people.

So I put on some heels and went out. And I had a fabulous time.

This was bigger than me just going to any bar or any band’s release party. This bar was where Bill had performed several times. Part of his senior recital was held here. He knows the owners, and I met them through him. In fact, when I walked in, one of the first things I saw was a picture of him. His old band is performing there in the near future I guess, and the promo poster still has his picture on it. Nicole Rae didn’t hold particular significance for us, but the drummer is a good friend of Bill’s.

So, I ran into many people I know because of Bill. And I was by myself. I didn’t have a girlfriend to huddle with on the side of the room. I didn’t have a boyfriend or date to silently flirt with. I was all alone. I spoke to friends of Bill and when they asked how I was, I told them that I was doing well. Maybe I was hypersensitive, but I felt like I saw pity or something in their eyes, so I decided to talk about the elephant in the room and told them that we had broken up. They offered obligatory words and sounds of condolences, but I was quick to say, “But I’m doing alright. My life is going well right now.”

I was introduced by Jason, a perpetual bullshitter, to a contemporary artist who is also a professor. He did not look like a professor. Considering my source, I didn’t believe him and the guy ended up pulling out his university ID, proving that he is a professor. The professor then introduced me to somebody who he claimed worked with the FBI. I told Jason, the professor, and the FBI guy they were screwing with me and then I walked away to find someone else to talk with. I ended up bouncing around between groups of people and standing by myself throughout the night. And it wasn’t nearly as terrible as I thought it would be. Interestingly, some of my favorite moments of the night were when I was by myself, watching the band perform.

I also ran into an acquaintance from years ago. We ended up talking for a good chunk of time. She said she had been reading my blog and had wanted to talk to me. She said she didn’t want to send the facebook message because of the generic quality of nearly every facebook message. The conversation was great. It feels weird to report some of the things we talked about because I’m a human and there’s an obligatory sense of self-efficacy. But because I’m a writer and blogger, I suppose I tossed that idea to the wind long ago. Anyway, she said she had wanted to tell me that she knew what I was going through – she knew what it felt like to be struck by love only to have it pulled out from under you – and she was impressed by how strong I was. “You are so much stronger than you think you are, Ashley,” she told me. “You are such a woman.” And she said “woman” in the way that means powerful and strong and confident. She went on to praise me for coming by myself despite what I’m going through. It’s great to be told you’re admired when you spend a great deal of time feeling like a fool.

The band ended with a cover of Fiona Apple’s Criminal. I stood next to Jason, sipping my water, watching the band rock out, dancers toss hula hoops in the air, and audience members sing along to the same angsty chorus that I’ve been listening to all week. And I felt great. That last song felt like the universe telling me, “Yes, you’re going to be okay. Life continues even through heartbreak. We are all in this together, so join in with the chorus and remember what it is to be alive.”