I don’t mean to be crass, but this winter fucking blows. It started out okay – the snow held off till December. We had a white Christmas and the usual single digits that had everyone asking in that midwestern obligatory fashion, “Cold nuff fer ya?”

Then came the Polar Vortex. That was cool. I had taken a vacation (by vacation I really just mean a few days away from my cubicle – I didn’t go anywhere fancy or do anything terribly exciting), and the first day of -50 came the day I was supposed to return. I was terribly disappointed when my car didn’t start. (Dead battery, then eventual flooded engine – a quick and easy fix for my dad when the weather rose to positive single digits later that week.) I spent the day watching Netflix and crocheting.

Then we had a bunch of little snowfalls. Nothing significant, but just enough to grease the roads, flip a few cars, and make me feel guilty when I’m sitting inside while my neighbor shovels. There was a day or two of freezing rain that coated everything in an inch of ice. And now we’re on a second Polar Vortex – we’ll have a little break of this frigid hell tomorrow (a high of 14, with a real feel of -2!) only to return once again to a high whose real feel is -33. 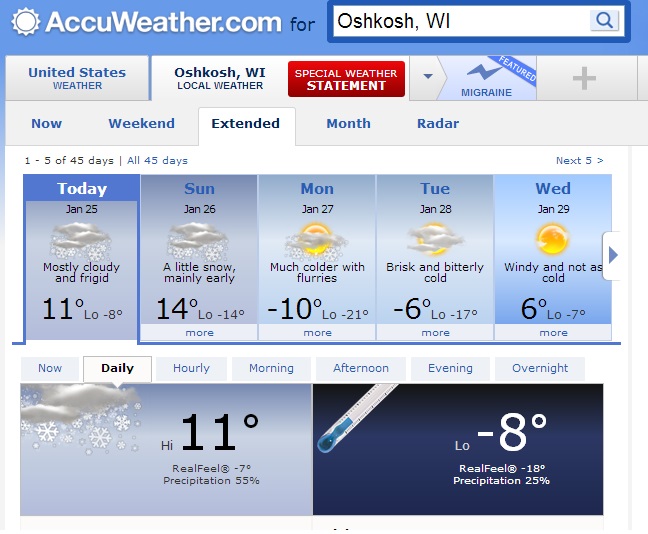 I do not accept this reality.

My main way of coping with this winter has been to surround myself with lots of yarn. I don’t trust any Midwesterner who claims to not suffer from Seasonal Affective Disorder. “I just like the cold,” he claims. YOU’RE A DAMN ROBOT.

Because I loathe wet socks, frozen nostrils, and numb fingers, I’ve never been one for winter activities. I might go sledding once a year, but I’m too busy thinking about how pissed I’ll be if the cocoa in the thermos isn’t hot when we’re done. I survive Wisconsin winters by maintaining a delicate balance of patience, apathy, self-examination, and binge-socializing. Allow me to explain:

1. Patience Lifelong Midwesterners claim that they could never live in a place like San Diego where the weather is perpetually perfect because they like seasons too much. I’m assuming this statement is only made on sunny July afternoons while drinking a cold Spotted Cow. Without rose-tinted glasses, a year in Wisconsin looks like this: 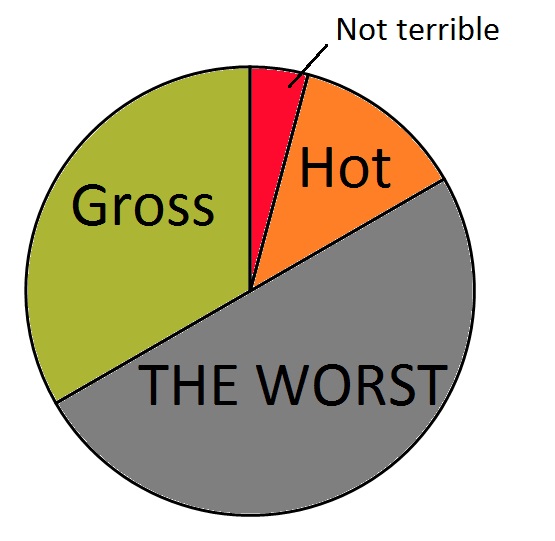 As you see, half the year is taken up by winter (see “THE WORST”). During this time we experience bitter cold, disgusting amounts of snow and ice, and asshole winds (technical term). The second largest part (see “Gross”) is closely related to the winter; the environment and climate are reluctant to let go of the winter, showering us with cold rain that yields mud, dirty snow heaps, and a perpetual grayness. This Gross period also occurs directly before THE WORST, giving an encore performance of cold rain and perpetual grayness. June, July and August tend to be quite warm and humid (see “Hot”), we either sweat at music festivals, baseball games, or coolourselves near a lake. During this time we should be constantly hydrating, but we like to chance it by drinking lots of domestic beer. There are a few days sprinkled throughout the year, during which the pictures depicting the glory of our four seasons are taken (see “Not Terrible”).

“Not Terrible” accounts for all of the following: Pristine snowfalls where the temperatures hover pleasantly between 20-35, cool spring mornings that allow coffee to be enjoyed on patios, sunny summer afternoons not requiring perpetual hydration, crisp fall days with maddeningly bright leaves and skies.

2. Apathy The winter is terrible. It is. Just don’t think too much about it. But you know what? You’ll get to one of those Not Terrible Days, but it will quickly change to a Gross Day. And just as soon as the Hot Days come, it will quickly become Gross again, and you’ll be forced to go through THE WORST all over. You’ll keep doing this, year after year, and then you know what happens? You die. So really, just stop thinking about it. We’re all going to die, so who cares?

3. Self-Examination I like to use winter as a time to do lots of reading. In between reading sessions, I bake, occasionally go to the gym, journal, and watch TV. Most of these activities inspire me to look within: How do I compare to that character? Should I really be baking cookies for the second time this week? I should go to the gym. I should journal about going to the gym and how good I feel afterwrads – that will inspire me to keep going. Then the self-examination just makes me bitter and I watch TV so I don’t have to think about all the things I’d like to change about myself.

4. Binge-Socializing After spending a significant amount of time on self-examination, I get sick of my own thoughts and reach out to people. I realize I have friends I haven’t talked with in a long time. I start dating again. I resolve to do something nice for someone else once a day. I’m just so sick of being in my head that I can’t bear to be alone with my thoughts any more, so I decide to just surround myself with people constantly. Eventually this becomes too much and I go back to my self-examination period.

It’s not a perfect or complete set of rules to get through the winter, but I’ve done it 25 times now, so I must be doing something right.

Error: Twitter did not respond. Please wait a few minutes and refresh this page.