Every Thursday, I dig out an old diary and share an entry sans editing (in hopes we’ll all see my grammar and apostrophe use improve) with a short commentary. If you like laughing with/at Young Ashley, feel free to use the handy search bar to the left and simply type “Throwback Thursday” and you’ll find the whole archive. Thanks for reading!

My cousin Kaylee came camping with us last week. It was so much fun! It was the Otto campout so the whole side of my Dad’s was there. Me, Stephanie and Kaylee mostly hung out together and Kyle occasionally. On the way up (Wednesday last week) we followed Kyle and his dad in their RV. Their RV broke down 2 times! The second time me and Kaylee had to go behind the cars to direct traffic! It was fun tho, because Kyle came out w/ us, and when a car didn’t turn, he’d freak out and start jumping around. But when we finally got there, we set up camp, then me and Kaylee went for a canoe ride. We went over by the marsh, and on the way home Kaylee was entertaining the whole lake by singing Pochanotas songs. (UGH!) The weather was perfect! Then, the next day, Stephanie came up, and we went for another canoe ride, and then we went swimming. That’s when we saw Brock. Oh he was HOTT! Later we went swimming with Kyle. Then Brock came and Stephanie went over to him and asked how old he was. He said 14! And then Steph wanted me to come over and talk to him (I was too shy) but I said no. We gave him points for being wet, being with a little girl (she was 3 or 4), and some more stuff, but it added up to 23! (For the 2nd time seeing him, that’s pretty good.

Then we got split up, Kaylee and Stephanie and then me and Kyle. We talked about Brandon and Kyle said that he flirted with me a lot. I said I couldn’t tell, because guys are confusing when it comes to the flirting part. He’s a cutie, but…there’s Austin! I really wish I didn’t like him! I sort of don’t. I really think I’ll always (shut u, I know this is sappy, but I don’t care!) have a place in my ♥ for him, but right now there’s other people in my life I can go for: Brandon or Cory. LOL I ♥ Guys.

A few weeks ago, I told you all I was on vacation. I spent the week at the same place all this swimming and Pocahontas-singing took place. While it wasn’t quite as memorable as this particular trip (or last year’s, with the Asshole Loons), it was a great vacation nonetheless.

Each year, my father’s family takes a camping trip to Boulder Lake Campground. It’s somewhere in Wisconsin. I refuse to know the surrounding cities for fear of the place losing some of its magic. Though people come and go and different times, we’re all basically there for the same week. It signifies that another year has passed, so naturally I compare myself and my circumstances to the year before. The 2001 trip probably varied from 2000 in that I talked to a male cousin instead exclusively with my female cousins. My 2013 trip varied from 2012 in that I truly welcomed a break from the twittersphere instead of just anxiously wondering if I’d come home to finding my ex in a relationship on Facebook.

I don’t know what road this is, nor do I care.

Boulder Lake exists in a separate reality. Though I’m great with directions and I’ve driven there on more than one occasion, I refuse to remember the roads on which to turn to get me there. I go there to return to a state of adolescence. Because we’ve gone there for so many years, I obviously have a lot of memories: When I was 19, my best friend and I stole wine coolers from my parents’ cooler while they slept, then ran down the camp road to the beach in our underwear, somehow not tripping over a root or loose rock in the vacuum-black that exists only in the middle of the woods. I couldn’t have been older than 8, but I remember building a miniature campsite just off a trail with Corey and being terrified when the ranger stopped and walked over – not to yell at us, but to give us little pencil bags with Smoky the Bear swag. And all those years stuck between childhood and teenage angst, when we weren’t swimming, my cousins and I would ride our bikes all over the campground, like we were hoping to discover some new loop of sites we had just been missing each year before. 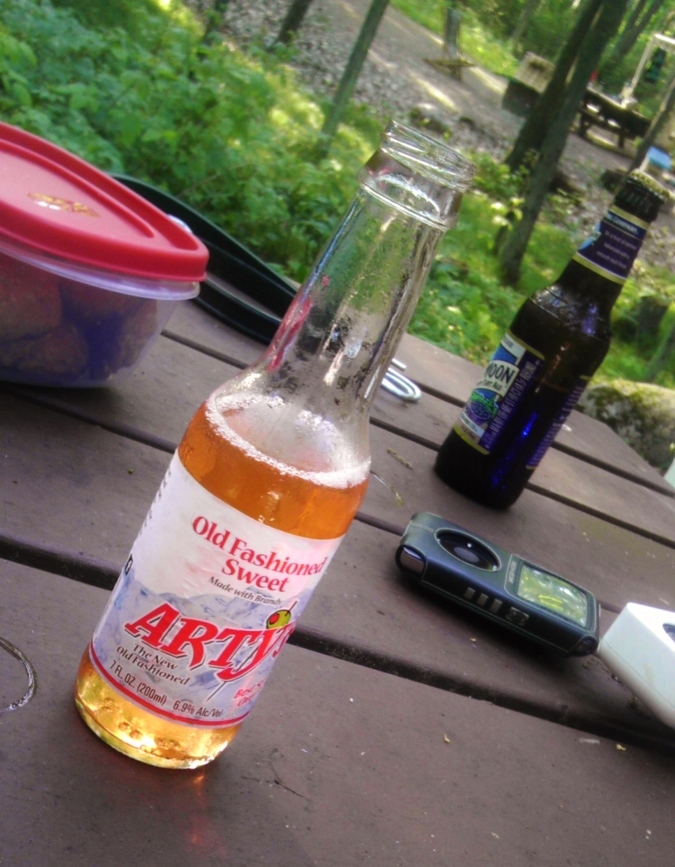 My uncle told me this was my grandfather’s favorite drink. Super classy old fashioned in a bottle? Sign me up.

Time is swift, and any mention of life’s brevity immediately sounds trite. But that’s what each trip to Boulder Lake pounds into my head: You don’t have as much time as you think. Value the time you spend with your family. Turn off the damn phone. Read another book. Sit and listen to the noises of the woods (ignore the generator running in the campsite next door). Talk less, listen more. Have another drink with your father. And if necessary, direct the traffic around your uncle’s RV, because believe it or not, he’ll be camping with the same one in twelve  years. 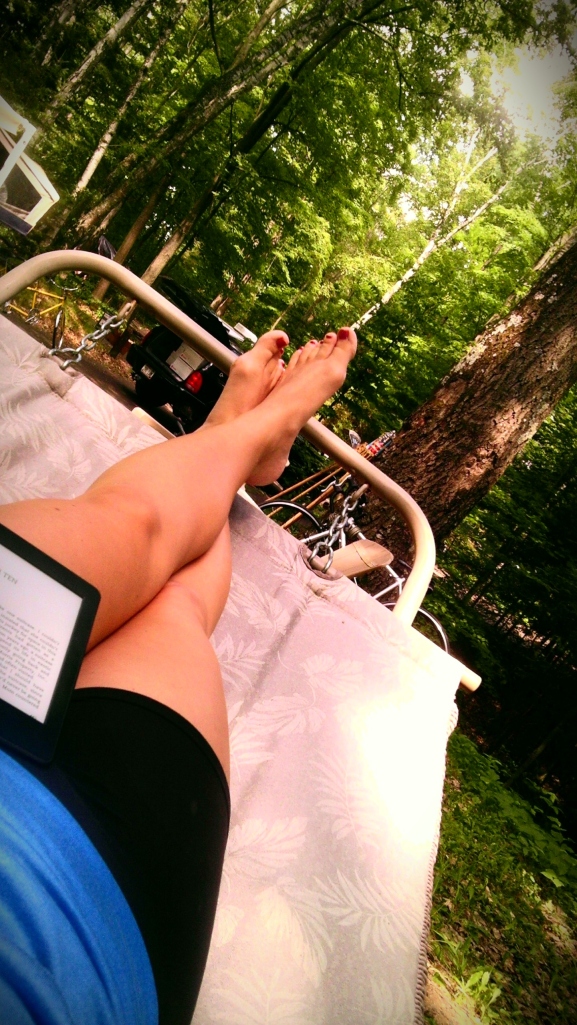 I guess I don’t have much to say to Young Ashley for this one. You went camping and had fun with your cousins. Remember that.

4 thoughts on “Throwback Thursday: Perpetual Childhood Should be a Thing”