Every Thursday, I dig out an old diary and share an entry sans editing (in hopes we’ll all see my grammar and apostrophe use improve) with a short commentary. If you like laughing with/at Young Ashley, feel free to use the handy search bar to the right and simply type “Throwback Thursday” and you’ll find the whole archive. Thanks for reading!

Oh, I’m confused. At first I thought everything was great with Austin, but now I’m not sure.

After dinner, Corey and Austin went to Taco Bell and then they went to Walgreens to buy Gelly roll pens. Ali and I went there too.

On the way home, Austin yelled, “let’s ditch ’em!” So I rode ahead of him and yelled back:

“I’m the one ditching you!”

So we got home and went inside. The boys went outside and Ali and I spied on them on Corey’s balcony. We came down and talked awhile.

We rode bikes around, nothing much, so I’ll skip ahead.

Katie called me when Austin and one of Corey’s friends, Caleb were still over. We talked awhile (Me and Katie) Austin kept inturupting me, so I’m like, “SHUT UP AUSTIN!”

After I hung up Austin’s like, “You talk to much on the phone.”

Then later Austin was talking to me. He said, “Has anyone ever asked you out.”

“I said no, because or otherwise I’d be grounded for life. I’m not allowed to go to dances.”

“Well what would you say if I ever asked you out? Which I’ll probably never do.”

I just stood there, stunned. Then he rode his bike.

I went up to my room, kept the light off and looked out my window, I heard Austin say to Corey, “I know! Tell your sister I think she’s really hot! And make it sound real!”

I almost burst into tears when I heard that. I ran to the bathroom and cried my heart out. I put my heart into this crush only to find out that all he said was just talk? Dad was gone while all this happened.

I looked out at Austin as he looked up at me and smiled. I didn’t get all worked up because I knew it was a joke.

As I washed, Corey dried. I knew he was waiting to break the joke to me. He was just waiting for the perfect moment to say his line: Austin likes you.

“Don’t play dumb with me. I heard you stupid conversation so shut up.”

I have reicived my first heart break. End. 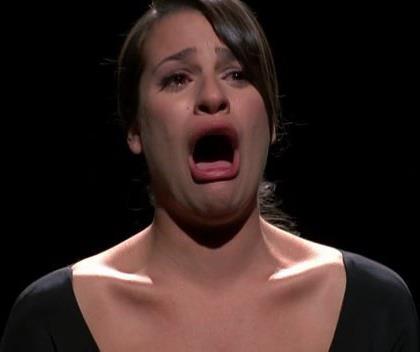 Not unlike Young Ashley’s cry face, I’m sure.

It would be nice to go back to the days when overhearing a plans for cruel joke constituted heartbreak. I don’t mean to minimize Young Ashley’s pain – it was all I had really known at the time. I hadn’t yet experienced the collapse of a relationship, so it was as real as a heartbreak could be.

I never really wanted my parents to know anything about my “love life,” so I’m sure I didn’t mention anything to my dad.  The whole ordeal was too humiliating to verbalize. I was already self-conscious, so telling my father that I had overheard my crush tell my brother to tell me he thought I was really hot wouldn’t have helped that.

I said last week that Austin is the reason I’m attracted to men with dark curly hair. We’ll also blame my inability to accept compliments on him. A few weeks ago, I was in an elevator with a man with shifty eyes. He told me I looked very beautiful. I thanked him and then made sure my purse was zipped completely. When he asked if he could buy me a drink, I told him I was on my way to meet somebody.

“He’s a very lucky man to be meeting with a woman so lovely,” he told me.

I thanked him again and then made a mental note to stop inviting conversation with people at public libraries.

Since I’m running on about 4 hours of sleep, my brain isn’t allowing me to follow the trains of thought as they develop. However, the following notes need to be made:

My message for Young Ashley this week? “Interrupting” and “received” are not difficult to spell. You weren’t even close. Get your shit together.

3 thoughts on “Throwback Thursday: Young Ashley gets her heart broken”