I got my first hater.

I was sitting at my desk when the green notification light on my phone started blinking. I finished up a small project before I checked it. Two new emails, 5 texts, and new interactions on Twitter. The emails were from WordPress, informing me of new subscriptions. The texts were from Twitter and a couple friends. Twitter told me of retweets (“Hey bed: I’m gonna sleep on you so hard tonight.”) and one mention.

The mention was simple. Thirty-six characters meant to express a single thought:

My words are stupid.

I was excited. I’ve had a lot of nice feedback about my blog (“It’s so funny!” “I love reading it!” “It’s on my quick links on my browser!”), but nobody has dissed it. While I’d love to think that everyone who reads this thinks I’m the next voice of America, I’m also aware of reality. In reality, I probably appeal to a small segment of the population: those people who are interested in the mildly entertaining thoughts of a twenty-something girl who lives in Wisconsin. I’m not writing to please everyone. To be honest, I write to entertain myself. If other people like it, that’s a bonus. I don’t say this to be a jerk. I say it because if I tried to please everyone (or even just one other person), I’d never be able to share anything.

I don’t write a political blog. I don’t write reviews. I don’t share recipes or crafts. I don’t give beauty advice. I write about growing up – and I don’t even give advice on that. I express expertise in nothing other than displaying my lack of perfection. I write a personal blog and I don’t claim to be anything more.

But this is beside the point, because he didn’t insult my blog. He insulted my Twitter feed. Which is sort of hilarious. It’s Twitter. I have 140 characters to express thoughts. I’m aware that Twitter can be an amazing social tool. It has the capability of connecting people from all over the world like a gigantic cocktail party with 8 million conversations – all of which are begging to be interrupted. Some of these conversations are highbrow and topical. You know like the ones that begin: “Hey bed: I’m gonna sleep on you so hard tonight.”

I’ve never understood why a person would insult someone on the internet. Maybe they just want to take advantage of the internet’s convenient veil of anonymity.

I’m at an interesting point with  my presence on the internet. It’s small – mostly friends and family on Facebook, a few hundred readers on WordPress, and less than 200 followers on Twitter. But I’m owning up to it. A year ago, I was a bit bashful and almost embarrassed to say I have a blog. Now, it’s one of those things I do. I’m not in the business of changing minds. If someone thinks blogging is weird or dorky, I’ll let them continue thinking that. I just know that I’ve found it to be a very rewarding and exciting experience.

The beauty of social networking is that you can make it whatever you like. I suppose I could use my Facebook, Twitter, and blog to educate, but I don’t. I use them to make jokes.

Also, to share the creepy picture I set for my desktop at work. 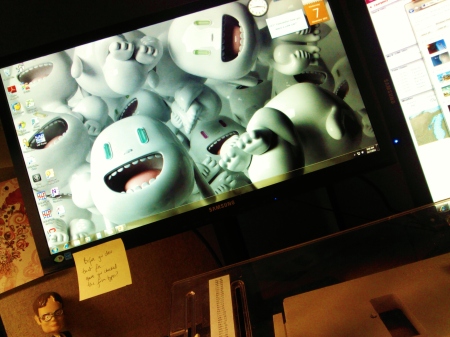 Anyway, I appreciate the hater. It gives me the chance to be self righteous about my self-indulgence. I don’t get a chance to do that very often.

I have already settled it for myself so flattery and criticism go down the same drain and I am quite free. – Georgia O’Keeffe