I did something weird this weekend. I went out Friday AND Saturday night. This is unusual for me for a couple reasons. The first is obvious – I don’t go out very often. I’m not usually a fan of bars. I don’t have a ton of money. I like to sleep, and when I get tired, I don’t like waiting on other people to decide to call it a night. The second is that it’s Halloween, and I don’t really like Halloween.

As a child, I didn’t like the creepiness of it. I’ve never planned a costume. Even when I went trick or treating, it was always some costume my mom and I threw together before I grabbed my plastic pumpkin bucket. I was usually a pioneer girl. Why? Because that’s what I usually had on hand. As I grew up, I learned that Halloween is a time for girls to get away with wearing lingerie in public and for boys to hide their excitement beneath conveniently bulky costumes. I started to hate it because I have neither the body nor the confidence to wear a corset and tutu while ordering a 7&7 in front of a group of strangers. I did the slutty costume thing once – I was a “Sexy Camper” (whatever that’s supposed to mean) The costume cost way too much and was purposefully lost during my move from Milwaukee to Oshkosh.

The year I dressed up like a substitute teacher (pencil skirt, vintage-cut sweater, smeared makeup, paper airplane in my hair, “kick me” sign taped to my back) was the year I decided to stop caring if I looked slutty enough. I decided to stop feeling inadequate because I had less skin showing than Bo Peep or the Sexy Clownfish (yeah, that’s a real costume). Maybe it was the women’s studies classes I took, or maybe it was because I didn’t like my thighs. The result was the same – I felt better not presenting myself like a trashy fairy tale character. So what if guys weren’t trying to rub against me? I didn’t want that anyway. I think that’s what bothers me most about teens and 20-somethings dressing up for Halloween: it brings out the desperate and animal characteristics in women and men.

Sure, the polite conventions of sexual tension are just facades, but I like them. We all have those hungry urges, Halloween just allows us to advertise them. And though I’m blatant about some things, when it comes to romance and affection, I prefer it to be a bit more subdued and eloquent. If a guy shows interest, I’m not naive to his intentions, I just enjoy prolonging the illusion that we’re self-controlled beings instead of animals. 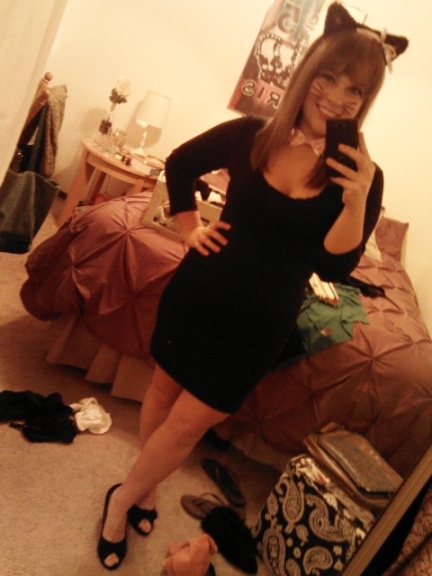 My room is always spotless, I don’t know what you’re talking about.

Anyway, I didn’t mean for this to turn into a rant on the sexual politics of Halloween costumes. It’s not exactly a unique topic anyway. I’ll segue by saying that I dressed as a sort of sexy cat for Friday night. I think the long sleeves and the fact that I wore a puffy vest most of the night negates the obvious sluttiness of the initial costume. I’m also pretending not to notice the obvious similarity to a Playboy Bunny, because UGH. I took women’s studies classes, so I can wear cat ears, but never bunny ears. Obvi. That’s what we call feminism, people.

On Friday night, Andrea and I stopped by a party in Oshkosh, then went to Peabody’s where we listened to some great live music. We had a guy introduce himself three times in five minutes. Then another guy threw a tantrum because instead of waiting for him to order me a beer, I bought my own. I’m pretty sure that’s where I’ll meet my future husband. 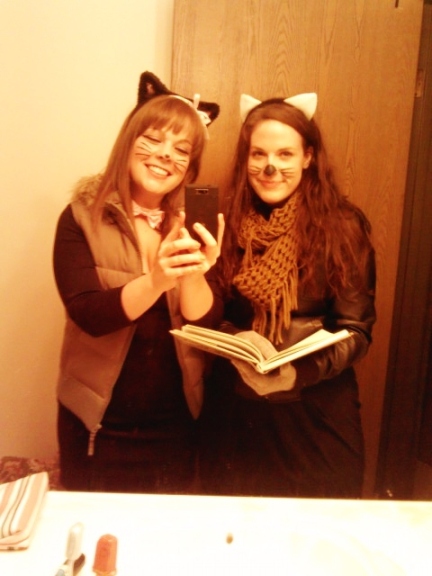 Bathroom pic with a Shel Silverstein book because we’re classy

On Saturday night, I wasn’t feeling the cat ears. My brother suggested I go to Home Depot and get a yellow hazmat suit, use his gas mask and be Jesse Pinkman. I didn’t want to buy a hazmat suit, so I went as Jesse Pinkman getting a breath of fresh air (and a beer) from a meth cook. 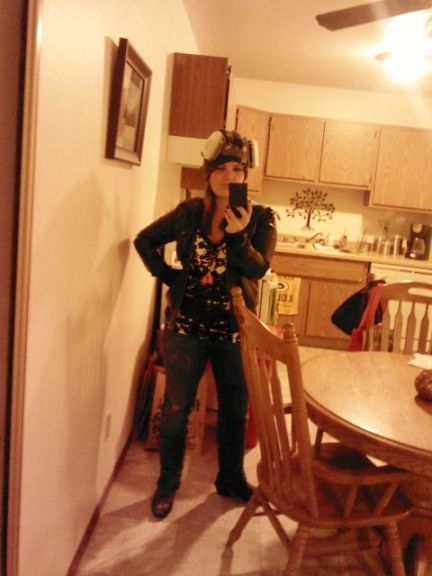 Jesse Pinkman probably has a metal sculpture of a tree above his kitchen sink, right?

Andrea lent me her leather jacket (I need to get one – the second I put it on, I felt like a badass). Corey lent me his gas mask, beanie, and big red magnet. I was hoping that when someone asked me what I was, I could point to the magnet and say, “Yeah bitch! Magnets!” and he would understand. That only happened twice. In the end, I just told curious people I was a hazmat worker and they should watch better television. 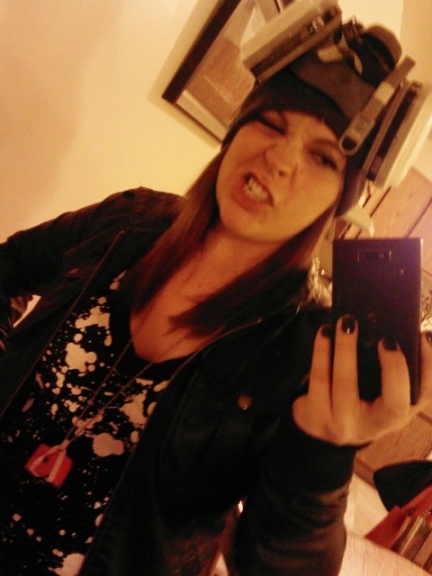 Not sure why this is the face I think Jesse Pinkman would make, but let’s go with it.

All in all, I had a surprisingly fun Halloween weekend and I went into work on Monday with my dignity in tact, which is more than I can say about the year I dressed like a scout.

The following photos are courtesy of my friends Kaleigh (the pinup Rosie the Riveter) and Andrea (the adorable kitty). 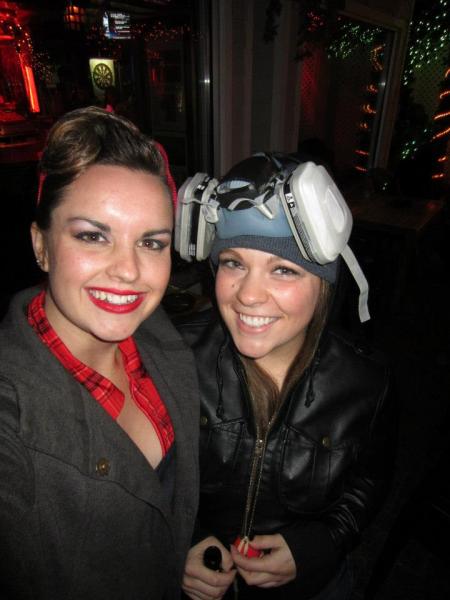 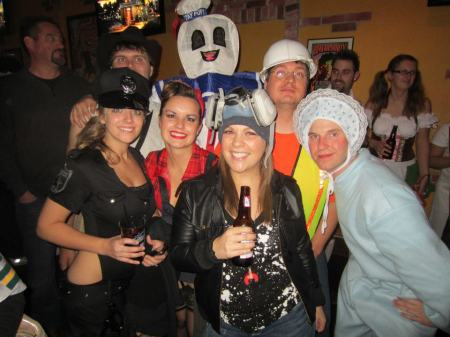 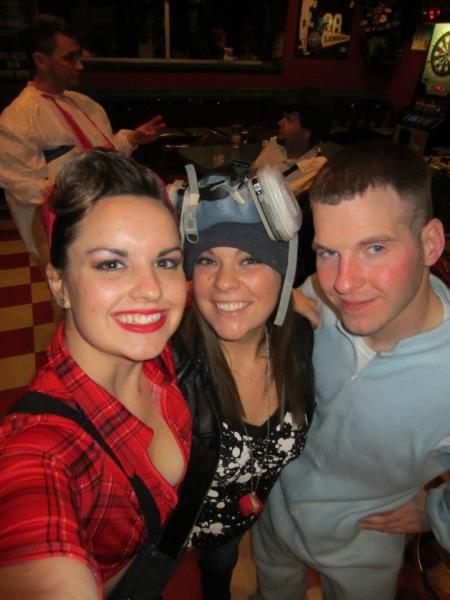 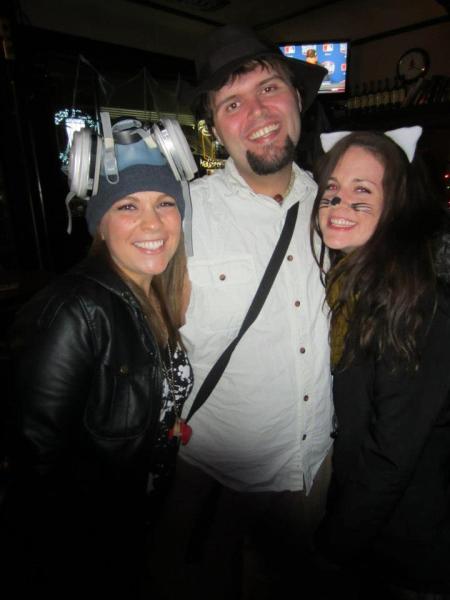 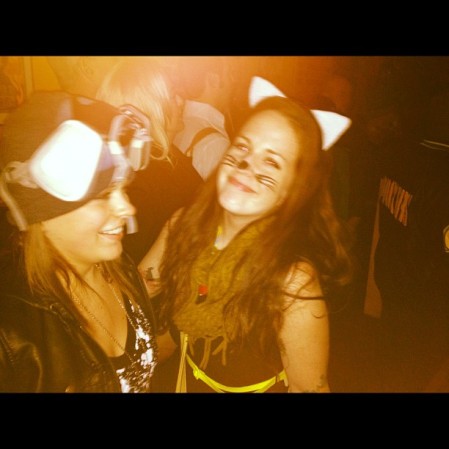 I hope you all had similar fun weekends. Stay safe and keep blooming.

3 thoughts on “My Halloween Weekend as a Cat & Jesse Pinkman”