I just spent the better part of two hours going through my apartment and the last five or six boxes I had in storage to find a stack of letters. For the last twenty minutes or so, I was furious. So many f-bombs. It’s a good thing my mother wasn’t present.

I was mad not because I couldn’t find them, but because I thought I threw them away. I thought I threw them away because about ten months ago, I was scaling my belongings down in preparation to move. I specifically remember going back and forth as to whether I should throw these letters away. I wanted to keep them because they were from a very good friend of mine and I thought they might come in handy for fiction writing someday (that day was today, thus the frantic search). I thought it might be a good idea to toss them because they held ties with my past and my boyfriend at the time wasn’t very comfortable with me still talking to him. When I weed things out, I spend about five seconds deciding what to toss and what to keep. After a couple hours of searching, I was nearly positive that I had gone with the latter.

So then I spent the last twenty minutes of the search composing an angry rant I would deliver to my ex (one that documented all the reasons my ex was stupid and why he needed to just get over it and accept that this guy is my friend and that whatever fragments of attraction or romance that may have existed years earlier were in the past  and we were just friends now who communicated solely through text messages twice a month and he just needed to trust that I was capable of controlling myself and that I would never do anything to compromise a relationship anyway and fuck him, why was I such a good girlfriend  even when he didn’t know anything about these letters because it never occurred to me to tell him because it happened years earlier and it wasn’t like it was something I went through and read every week just to reminisce or laugh at all his witty jokes and hijinks and so what if I kept them for sentimental reasons – they were funny and reminded me of the years I spent in Milwaukee and they also represented a period of growth and also documented the beginnings of my first serious relationship with a man who has psychopathic tendencies that ended disastrously because how else could it end and I wanted to see how my friend had reacted to  my news when I told him I thought it was best to stop exchanging letters because I thought it was best for my relationship and what the hell, why did I throw those letters away?!), never mind I deleted his number and can’t remember it anyway.

Then I found the letters. 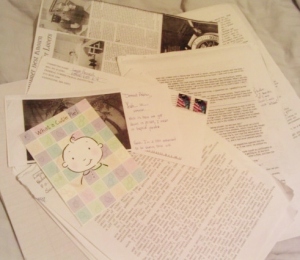 And then I realized that if I had thrown them away back then, it would have been my own fault, not my ex’s.

So, what did I learn? Never throw out material that may provide inspiration just to coddle a significant other’s insecurities, because inevitably, things will change and you will be furious at yourself. Also, your apartment will be a mess.