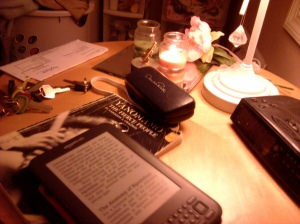 I have this condition. I find I’m willing to do anything other than whatever it is that I need to do. I’m supposed to be reading The Dying Ground, which is a hip hop novel for my African American Women Writers class (from here on known as AAWW) . Don’t ask me what a hip hop novel is because I don’t know – I haven’t started reading it yet. I’m supposed to have ten chapters read by at 1:20 tomorrow afternoon. I’m also supposed to finish reading Lorine Niedecker’s collection of poetry, but as I found out last week, it takes about ten minutes to get through 50 pages of imagist poetry, and there’s no need to really understand it anyway. I’m not expecting this novel to be bad. I’m not expecting to hate it. I would just rather do anything else, including reorganizing my music files on my computer, watching two seasons of House (I watched the first episode of the season and have no idea how he ended up in prison), making sure there are no typos in my history or biology notes, reading ahead in my anthropology textbook, or reading the case study on the Yanomamo: A Fierce People. I read the first twenty pages last night.

A high capacity for rage, a quick flash point, and a willingness to use violence to obtain one’s ends are considered desirable traits. Much of the behavior of the Yanomamo can be described as brutal, cruel, treacherous, in the value-laden terms of our own vocabulary. The Yanomamo themselves, however, as Napoleon Chagnon came to intimately know them in the year and a half he lived with them, do not all appear to be mean and treacherous. As individuals, they seem to be people playing their own cultural game, with internal feelings that at times may be quite divergent from the demands placed upon them by their culture. This case study furnished valuable data for phrasing questions about the relationship between the individual and his culture.

The Yanomamo appear to be constantly on the verge of extranormal behavior, as we define it, and their almost daily use of hallucinogenic drugs reinforces these drives to what might seem to the outside observer to be the limits of human capacity. Life in their villages is noisy, punctuated by outbursts of violence, threatened by destruction by enemies. To the ethnographer it is frightening, frustrating, disgusting, exciting, and rewarding, and in this case study the ethnographer lets the reader know how he feels. His honest reaction helps us, as interested outsiders, to know the Yanomamo.

You can’t tell me that doesn’t sound interesting. Here are these people, living in small groups, doing drugs and attacking each other. It sounds full of that sensational crap that gets my attention whenever I flip past the Discovery Channel and they’re having a marathon of shows on human sexuality.

Midterms are overwhelming. I had two tests this morning – history and biology. I crammed for both of them over the course of the last three nights because I am a smart person. Neither test was very bad, but as I’ve made it clear, my mind practically refuses to retain scientific information, especially when describing things like cell division and the Calvin cycle. I think they mentioned ATP and NAD+ somewhere in there, but I’m not sure about the significance.

I completed a take home test for AAWW. It was an essay and it enabled me to bust out my amazing outlining skills. I really hope that’s a skill employers look for, because I am great at it. Now, all I need to do is read, but instead I’d rather document my procrastination skills on my blog.

I am an excellent college student.