I spent the day at my parents’ house, writing and editing a few pieces for a portfolio I have to hand in next week. When I walked through the door, Jack, my family’s younger dog, came lumbering through the kitchen to greet me. Hallie was asleep in the living room. I walked to her and ignored Jack’s insistent whining, and pet Hallie. It took a few seconds, but she cracked her eyes open and she threw a paw over my wrist, as if she were saying “Don’t, for any reason, stop petting me. Ever.” I wasn’t prepared for the tears to come as early as 9am.

I camped out on the couch with my laptop, diligently editing the Dear Jackass essay (which actually works better as a story than as an essay. As an essay it’s disgustingly self indulgent and pathetic sounding. As a story it’s got a great torch song sort of feel to it) and redrafting another piece I’ve been working on. Jack slept under my feet, and Hallie slept on the bed across the room. I found myself wondering how I was supposed to treat her. It was her last day alive. Was I supposed to shower her with affection all day? Was I supposed to indulge her every whim? If I did that, then she would know something was out of the ordinary. And for some reason, I didn’t really want that. I didn’t want her last day to be this festival of canine indulgences. I wasn’t going to take her for a car ride because she couldn’t get into my car, and I couldn’t lift her. Even if she did make it into my car, she’d spend most of the drive whining, even if I opened the window or got her to lie down. I thought about taking her for a walk, but she couldn’t do that either. Arthritis must have attacked her back hips because her back end would collapse every now and then, surprising her. She stopped chewing on toys when Jack came into the house and decided to tear them apart. What he didn’t tear, he drooled all over. I was left to give her affection and food. At this point, those were the things she loved most. Luckily, there was a canister full of peanut butter treats in the cupboard, and she looked at me with just pathetic enough of a look for me to give her half my turkey sandwich.

When my family returned at the end of the day, my mom asked Corey if he’d take pictures in the backyard. My initial reaction was, “God that’s tasteless. I don’t want a picture of her on her last day, prancing around in the backyard as if everything’s okay, when she’s just going to be dead in a few hours.” But I kept my mouth shut, because it wasn’t tasteless. It was just sentimental, and there’s really nothing wrong with that. We were all outside, quietly crying in our own ways. I don’t think anyone wanted to look at each other. I looked to my dad to give me a hug once I wiped my eyes, but realized he was doing it himself. It seemed like a selfish thing for me to ask for comfort at a time like this. We were all hurting, and who was I to say that my pain was any greater than that of my father, mother, or brothers?

Corey snapped photos, and it still seemed forced and exploitative. I felt a weird surge of anger, but I wasn’t sure who I was mad at. Myself for reacting? My mom for making the decision a few days earlier? The vet for agreeing to make a house call? My brother for taking the pictures? My dad for going along with it? My parents for getting her eleven years earlier and making me fall in love with her? Luckily, there was no portrait of the family, pretending to smile. I think I might have screamed if anyone had suggested it. 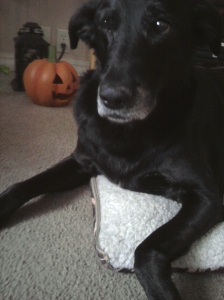 It just seemed so awful that we were all grieving while she continued to wag her tail, trusting us completely.

Back inside the house, we waited for the vet to arrive. I wondered who would be the last to touch her. It occurred to me there was another weird injustice that had happened. At some point, she started developing fatty tumors on her body. Her ears itched constantly. A canine version of menopause (that’s a thing, right?) developed and she’d stand in front of you, panting and dancing, not indicating thirst, hunger or the need to release her bladder, just saying, “I’m hot and you’re going to suffer with me by smelling my breath.” I got annoyed with her, not wanting to pet her as much since she was so persistent. But here we were, giving her the most attention she had gotten in years, and she was loving every second of it.

So many details made me angry: how my family all sat at the perimeter of the living room, waiting for a turn to pet her, how the last car she’d bark at would be driven by the man who was going to kill her, how he backed his truck into the driveway, how he had brought an assistant to watch our mourning, how strange it was to hear my father cry, how my when my mom cries, she lets out these quiet squeaks at the end of her exhales, how Ryan didn’t move to touch Hallie without an invitation from my father, how she needed two shots of tranquilizer before she rested her head on the blanket, how the vet and his assistant stepped outside to give us time, how he had to shave some fur off to find a vein, how when injected her with the anesthesia I couldn’t see the needle because my mother was leaning over her, blocking my view, how her tongue wouldn’t stay in her mouth and her eyes wouldn’t close, how the vet listened to her heart and stepped back, and how my father finally asked if she was gone and the vet replied quietly, “Yes, she’s gone.”

The details made me angry because though they were my details, I knew this had all happened before. The vet knew the most convenient way to take the body was to back the truck in. They had seen families cry before. He knew that sometimes labs need two shots of tranquilizer before they slow down. To the vet, this was just another appointment. This was just the final task in his day, and it was his job to make sure we felt as if he had a meaningful connection to our dog, as if he remembered her as a puppy, though he sees hundreds of animals every week.

I wanted some sort of reassurance that this was important to somebody other than myself. I wanted to know that Hallie no longer living was going to effect the world in a bigger way than Jack wondering where his buddy had gone and my family feeling her like a phantom limb. But the fact is that there will not be giant ripples felt throughout the world. My childhood dog is no longer alive. I know that other people may not care that she once carried around stuffed animals that we called her “babies”, but it matters to me and my family. And while it might be disheartening to realize my experience is not truly unique, there’s a comfort in knowing that millions of other people have experienced what I am, and that they have gone on to remember their dogs by photos and fond memories.

One thought on “Youth in Asia”