I  know your mom just gave you a gift. It’s a pink valentiney scrapbook from Target. You know, one of those premade ones where all you have to do is cut the pictures and paste them on the pages using an acid-free gluestick. It’s a nice gesture, but you hate it. You’re single, so it’s strange that she gave this to you. I’m still not sure why she did. Maybe she thought you would post pictures from a Valentine’s Day party in it. Or maybe scrapbook romantic pictures you cut out of magazines. But you’ve never so much as kissed a boy, so I understand your confusion regarding this gift.

It seems like a cruel joke, this scrapbook. When all the other girls at school are asking boys to the Sadie-Hawkins-style dance in February, you’re harboring a crush for a boy who doesn’t really know you exist. All you want is for a boy to adore you, to tell you that you’re beautiful and that he loves you. You won’t ever admit this aloud, but you just want a boyfriend. You’ll pretend that you really want to go to the dance, and that you’re disappointed when an honors string festival will take you out of town that weekend. But really, you’re glad to have an excuse. When girls ask you who you’re going with, you’ll say, “Oh, I’m not able to attend. I was invited to join an honors string festival that weekend.” You’ll pretend like you would have had somebody to go with, and that you’d fill this album with pictures of the two of you.

You’re not sure what makes people fall in love. It seems like something that will only happen to other people, that their brains are wired differently than yours. When you’re twenty-three, you’ll listen to a podcast titled “This is Your Brain on Love“, and you’ll recognize the chemicals and the interactions that create that sensation. Instead of betraying you, dopamine, norpinephrine, and oxytocin will work together to create what you’re dreaming of.

When he first smiles at you in orchestra, the dopamine will surge and you’ll return with an embarrassed, close-lipped grin. After the two of you have talked and he finally proposes the two of you meet up, the norepinephrine kicks in and focuses all those dopamine flashes toward him. And these flashes of dopamine and norepinephrine will get faster and faster because he texts you and asks when he can see you again, or you’ll remember the way he kissed you the night before. After a while, once the two of you have watched all of 30 Rock and Arrested Development, oxytocin will kick in and even things out, giving you a sustainable contentedness. 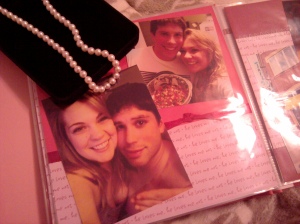 So you’ll sit down one afternoon and spend 40 minutes filling the thing with pictures of the two of you. And you’ll realize that all the time you waited might have really sucked, but that it’s been worth it. While you’re fifteen, you’ll imagine that the album will be capable of capturing the entire relationship – like it will develop these fantastic qualities which enable the viewer to realize that a few hours before that picture was taken, you had been carefully preparing homemade beef stroganoff for him, or that he had suggested playing laser tag instead of doing the chicken dance at that wedding.

The scrapbook that you’ve shoved under your dresser will someday be filled with pictures of you and a man who gives you pearls for Christmas. You’re impatient, I know. But don’t worry. He’ll be worth the wait.

2 thoughts on “To my fifteen-year-old self”